Why "You Never Pass Up A Good Chert Road" 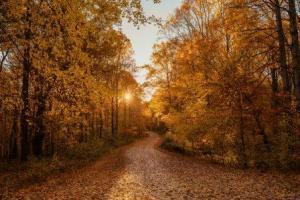 My friend Ross Jones tells a great story about a line his grandfather used regarding some of the unknowns in life. He said “you never pass up a good chert road.” I seriously dig that. I don’t know what Ross’s grandfather looks like, but in my mind I see Wilford Brimley – and that alone is enough to give those words some weight. If you’ve never heard of chert, it’s a sedimentary rock that was used years ago to make sharp tools, start fires, and sharpen steel. Today you might see it as a decorative rock, or material for road surfacing. In my part of the country it often has a brown to red/orange color.

As a kid, I remember seeing chert roads on and around my grandparents’ farm in Tennessee. I recall tractor rides on my grandfather’s lap when he would let me steer what seemed like a huge, blue Ford tank. I had to stand straight up on the brake with both feet to make it come to a stop. Often when I would “drive” that tractor we were on a chert road. It was exciting for me, particularly if we were going somewhere new. “Where does this go?” I would think. “I wonder what we’ll find.” “Maybe I’ll see something I’ve never seen before.”

I think the point of this grandfatherly quote is if you pass that chert road, there’s no telling what you might miss. Something new. Something exciting … maybe even a little scary.

A couple of things came to mind as I thought about this. First, as a movie buff, I often relate to things through pop-culture. Do you remember the movie Field of Dreams? Kevin Costner plays an Iowa corn farmer who hears a voice that tells him to build a baseball diamond on his farm. He does so and the “magical” diamond and cornfield lure the ghosts of the old Chicago White Sox players back to play.

There’s a moment toward the end of the movie when James Earl Jones’s character (Terence Mann) is invited by the players to go back into the corn with them, where they seem to just disappear. Mann stands at the edge of the corn like an excited child. He reaches in and pulls his hand back quickly as if he was tickled. He smiles and walks in – to find out what’s out there – and disappears.

Second, I thought of the last part of Robert Frost’s poem “The Road Not Taken.” He wrote:

I shall be telling this with a sigh
Somewhere ages and ages hence:
Two roads diverged in a wood, and I—
I took the one less traveled by,
And that has made all the difference.

I write and speak frequently about the desire to be comfortable in our lives and often it keeps us from growing as people. The chert road is an example of a literal road you’ve never traveled, but it can also be an analogy for so many things in life you may have passed by: the job you turned down; the girl/guy you never asked out; that new hobby/interest you keep putting off; saying something to a loved one before it’s too late. Any alternative from your normal “road” in life.

Of course we can’t explore every chert road we go by, but it’s way too easy – and comfortable – to cruise down a familiar road - or at least one that looks well-worn. It’s recognizable. It’s routine. It’s old hat. Mostly it doesn’t make your stomach churn. On the other hand that chert road is very different. Who knows where it goes? What if it’s washed out somewhere along the way? What if it leads somewhere I don’t want to be? What if it leads nowhere?

I have a pretty good sense of direction that I get from my father. Lots of times in the car, he will take a different way home from wherever he has been. He still does it to this day. Most of the time it’s simply to see something different and break the dullness of always doing the same thing. I have continued that tradition with my family and I can tell sometimes they wonder what the hell I’m doing. I’ll pull off the interstate and hit some side road and my wife will say “What are you doing? How do you know this is the right way?” I usually say something like, “Well, we’re still going the right direction, so let’s just see what this way is like.” I can never tell if she’s impressed or irritated. Probably both.

Not everyone likes to do things differently or try new things. The routine and structure of their lives is satisfying. We all need some of that to be productive. What we don’t need is all routine without some spontaneity. All order without some disorder. All structure without a little demolition. It’s the yin and yang of life that makes it interesting.

What is the “chert road” you passed in your life right now? You made the conscious decision not to turn. Why? Maybe you think it’s not that important. Maybe you have a really good reason. Maybe you have a really terrible reason but have spent a great deal of energy convincing yourself it’s a good reason because you’re an adult now with responsibilities who can’t just do things on a whim anymore because you don’t have the time to be driving down some stupid, rocky, dirt road without any idea where it goes or what will happen if you do. Now THAT is an awesome run-on sentence, but you know exactly what I’m saying!

It’s probably not feasible to take every chert road we see. That’s not the point. The point is we’re on this tiny, spinning globe for a relatively short time and while the interstate may be the fastest, most efficient way to travel - it’s usually the most tedious.

Maybe it’s time to turn … turn that big blue Ford tractor down the chert road and see what’s out there.

It could make all the difference.