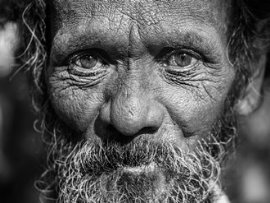 I watched a celebrity being interviewed on television the other day and almost didn’t recognize them. They’d had so much work done on their face that I wasn’t sure who it was. I double checked the name to make sure I was seeing correctly. We’ve all seen someone who’s had too much cosmetic surgery and it didn’t seem quite right. Think Robin Williams in Mrs. Doubtfire when he says “I’m ready for my close up Mr. Demille.” I’m not sure what “right” is supposed to look like, but I know it when I see it.

To some degree most of us care about the way we look. Like most things, some people care a lot more than others. We live in a world where being handsome or beautiful is valued - even sought after. I understand some people depend on their looks to make a living. I also get that our society places more pressure on women to look good than it does on men. As a male who benefits from that bias, I recognize how badly that sucks.

Before I move too far into this and get ripped for being insensitive or judgmental, I have no issues with anyone who’s had cosmetic surgery. That is not what this post is about. It concerns what our faces say about our lives. It’s about being engaged in all that life has to give – good and bad. It’s also a chance for me to watch that clip of Robin Williams multiple times as I write this.

For those of us who have lived a few decades, I would argue that our faces tell a story. When my sister and I were young, our mother would sometimes have us play a game when we were in public with time to kill. An airport was particularly fertile ground as we picked out individuals or groups and made up our own stories about their lives. We watched for a bit to get a snapshot of what was happening and then created our own narrative. Looking at each person’s face was integral to building our stories. You can tell a lot from a person’s face, beyond their actual features. We tried to absorb all the different dynamics occurring at that moment, but reading people’s faces was the key.

My Sunday School class has been studying a book entitled Beatitudes from the Backside by J. Ellsworth Kalas. I was leading the chapter on mourners being blessed and Kalas made a statement about the challenges in our lives, and what it does to us and for us. He makes note that we tend to take more pictures of infants than adults – “when our faces are unformed, so to speak … before our experiences have written their story into our features. It’s the experience of living, including especially the tests of life, that brings quality and character until at last we get the face we’ve earned.” Read those words again: at last we get the face we’ve earned.

I cried reading that while preparing for the lesson. Between my wife and me, we are 4-time cancer survivors, so I couldn’t help thinking of all we’ve been through over the years. I was a little sad, but also emboldened. I started to think of the difference between having a face I’ve earned and one that just happened. Do you know what I mean? Even if you haven’t faced major crises in your life, this difference still applies. The definition of earning means we have engaged, gained, acquired through merit, etc. A face that just happened implies we didn’t do much – things befell us and … oh well, it just turned out that way.

There are way more things in life that we don’t have control over than those we do, but I’ll be damned if I’m going to look back and say “I don’t know, it just turned out that way.” The tag line on my website is Reach…Grow…Do for a reason. Those three words should be lifelong pursuits for all of us. They help move us out of our comfort zones into an existence that shows positively when others see our faces.

Remember the scene in the movie Parenthood when Steve Martin’s grandmother describes a life well-lived like a roller coaster? She said “You know, it was just so interesting to me that a ride could make me so frightened, so scared, so sick, so excited, and so thrilled all together! Some didn't like it. They went on the merry-go-round. That just goes around. Nothing. I like the roller coaster. You get more out of it.”

Now that’s a face to be earned.