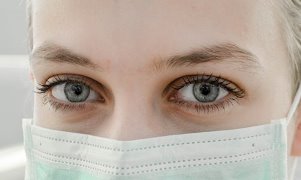 I read recently about the resurgence of the measles virus in the United States even though it was considered eradicated back in 2000. Since that claim there have still been between 50 and several hundred cases reported each year. A big factor seems to be travelers returning home from other countries where the disease is more active and infecting those who are not vaccinated. I won’t get on my soap box about those that don’t believe in vaccinations, even though it’s ridiculous, unfounded, and irresponsible.   Does that count as a soap box?

I learned that measles is one of the most contagious viruses known and can linger in a room or on a surface for up to two hours after the infected person has gone. That’s amazing. An infected person has the ability to infect other people they come in contact with AND after they’re no longer in their presence.

Let’s flip this for a minute and use measles as a metaphor. I’ve known and currently know people that are just like the measles – but in a good way. They walk in a room and you can tell they’re “infected” with something positive. It could be their faith, attitude, humor, work-ethic, etc. Sometimes it’s something as simple as a smile.

Hall of Fame basketball coach Bob Knight tells a great story about one of his players on the 1984 Olympic Team – Waymon Tisdale. Tisdale made a mistake on the court and Knight pulled him out to “correct” the mistake. Knight’s temper is legendary and he admitted he was going to rip into Tisdale when he came off the court. As the young man ran up to Knight, he prepared to lay into him, and Tisdale greeted him with the biggest, brightest smile in the world. Knight said it disarmed him to the point he just shook his head in frustration and told him to get back out on the court.

A smile that can disarm Bob Knight is an epic smile. That’s the kind of smile that makes a difference to everyone who sees it. I followed Tisdale for the rest of his NBA career after hearing that story and watched him become an acclaimed jazz/funk bass guitar player. Sadly, he died in 2009 after a battle with cancer. With all his accomplishments, everyone who knew him talked mostly about his warmth, kindness, and that unbelievable smile.

Sticking with my sports theme, Hall of Fame baseball player Jackie Robinson is credited with one of my favorite quotes of all time: “a life is not important except in the impact it has on other lives.” Let that sink in a little. It’s sobering to think that our entire lives will have no importance if we haven’t made a difference in other people’s lives.

I think quite a bit about what kind of impact I’m having on those around me. What am I infected with? I’m using this metaphor to show how our lives can be contagious to others in a positive way, but we all know folks who are contagious in a negative way. In fact, negative qualities and attributes are just as contagious, if not more: bad attitude, dishonesty, cruelty, cynicism, disrespectfulness, hopelessness … I can go on and on. We all know those people that walk into a room and immediately suck all the life out of the place. That type of infection seems to spread faster than the positive kind. Why is that?

Well, young Skywalker, I’ll tell you. After some less than persistent Googling, I found there is quite a bit of science behind what psychologists call the “negativity bias.” It means that, as humans, we register negative stimuli more readily than positive. In most interactions, we are more likely to remember negative things and remember them more vividly.   In short, it’s the “bad” things that catch our attention; we remember more; and hold on to longer. It’s why you can have a good day, but the first thing you tell your family when you get home is about the driver that cut in front of you, cussed you out, flipped you off and almost caused a 10-car pileup.

Armed with this knowledge, we can either succumb to it, or work harder at spreading the “right” kind of infection. If we know we’re naturally wired to pay more attention to negative things and let them influence us more, we need to start flooding this world with positivity to try and balance that scale some. And let’s not make it harder than it has to be. I’m particularly good at that. I think if I’m not affecting something on a grand scale, then it’ not worth doing. Most of us don’t have 20 million Twitter followers, so let’s make it easy and work on doing it consistently.

These are just a few of mine and I want you to think hard about your own. Remember what I said about the measles virus at the beginning of this. It’s terribly contagious and it stays around even after you’re gone.   You are infecting others every day whether you know it or not. Your virus is lingering long after you’ve left home, work, or anywhere else.

The great thing is we get to choose what we will leave behind.

Choose wisely – for all our sakes.