Hope - Why Andy from Shawshank Was Right 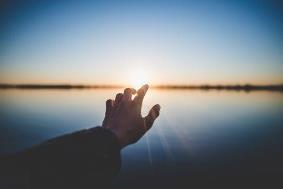 There are several movies I feel compelled to watch every time they appear while I’m surfing through the channel guide on my television. Some are classics and some I would be embarrassed to name, lest you judge my cinematic taste. From The Godfather to Monty Python and the Holy Grail, I’ll watch. You want to take a deep dive into Jeremiah Johnson, fine. I’ll also take that dive with you intoTalladega Nights. I like to call my taste eclectic. Some call it unexplainable. Whatever.

One of those “I have to watch regardless of what point in the movie it is” movies is The Shawshank Redemption. If you haven’t seen it, Tim Robbins and Morgan Freeman star as inmates at Shawshank Prison with little chance of ever being released. Robbins’ character “Andy” and Freeman’s “Red” become friends and the subject of hope comes up at lunch one day. Andy shares his idea of hanging on to hope and Red shuts him down quickly saying “Hope is a dangerous thing. Hope can drive a man insane. It’s got no use on the inside. You better get used to that idea.”

The pair does indeed get out of prison (under entirely different circumstances) and Andy sends Red a letter with an invitation to join him in a remote Mexican fishing village. He finally responds to Red’s earlier warning saying “Remember, Red, hope is a good thing, maybe the best of things, and no good thing ever dies.” I agree.

I’ve been thinking quite a bit lately about that word hope. Our family is dealing with my wife’s cancer recurrence after twelve years of being clear. Unfortunately we’re veterans in this war as this is the fourth time we’ve battled it between the two of us. We know more about what to expect this time, but there is still a heaviness that won’t completely go away. Somebody asked me the other day how we were doing and I said we’re “mostly ok.” I describe it like treading water. We’re spending all this energy to keep our heads above water and not drown – but we never get anywhere. We’re often exhausted as if we’ve been swimming for miles, but we’re still in the same place.

I continue to pray and hope for my wife’s healing. For me, praying is simply talking to God, but what am I doing when I hope for something? Is it the same as wishing?

After doing a little research on the words hope and wish, I would say they are not the same and even though a thesaurus lists them as synonyms, they should not be used interchangeably. Most of the definitions and commentary about the difference focused on this: hope is an expression the speaker/thinker believes is possible and wish is an expression the speaker/thinker believes is not possible or highly unlikely. Definitions of hope included words like “expectation” and “feeling of trust.” “Cannot or probably will not happen” were common for wish. I hope I get promoted at work. I wish I would win the lottery.

I’m writing this on a huge cruise ship staring out over some of the most beautiful scenery I’ve ever seen in Alaska. I see God everywhere I turn and I’ve taken the opportunity to talk to Him a lot about my hopes and all this treading water I’ve been doing lately.

I stuck my earbuds in as I walked around the the ship earlier today and hit play on an old Los Lonely Boys song called “Heaven”. This song always lifts me up, but I listened more closely this time to two lines in particular:   "I just keep on prayin', Lord, and just keep on livin” and “So I just got to have some faith and just keep on giving”. As I cried, it hit me that I need to keep on living and keep on giving no matter what’s going on around me. I’ve taken the long road to get to my point, but simply treading water sucks. It’s not doing me any good – or anyone else for that matter.

Are you treading water these days?  I know the feeling. I believe we have to spend our energy in a different way. Just keeping our heads above water isn’t good enough. We have to swim toward something … and hope can spur us along. Hoping isn’t wishing. It’s desiring and trusting that something is going to happen:  Hope for healing. For a more positive attitude. A better job. A stronger relationship. You name it!

Now that we’ve named it, we have to start swimming toward it. No more being stationary. There is work to be done. It’s not that treading water isn’t a lot of work – it just accomplishes the minimum … not drowning. Now, that’s obviously important, but do we really want to look back at the end of our lives and say “Well, I didn’t sink!”

For me, life seems a little overwhelming right now, so I’m going to take it one step (stroke) at a time. Most of us have issues and struggles we’re dealing with, so if you’re in that boat, I encourage you to do the same with me. Pick something each day that will move you toward the hope(s) you named. They don’t have to be huge, but they do have to push you out of your current comfort zone.

You may be fighting with some demons right now like I am, but join me and we will hold fast to our hopes - making strides every day, no matter how small, to help us keep on living and keep on giving.

Author Anne Lamott said “Hope begins in the dark, the stubborn hope that if you just show up and try to do the right thing, the dawn will come. You wait and watch and work: you don't give up."