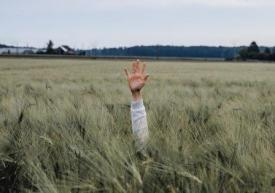 My Sunday school class was discussing generosity recently and we talked quite a bit about what motivates us to be generous or helpful to others in need. Why do we decide to get involved in some areas and not others? Do we need a personal connection to the situation? Do some things tug on our hearts more than others? Does Sarah McLachlan have to sing that song from the SPCA commercial before we act? Is it all a matter of timing in relation to what’s going on in our own lives?

Maybe a better question is: why do we choose to ignore some situations when it’s clear there’s a need – and we have the means to help? I believe often we don’t act on certain impulses because we think “Well, surely someone else is going to help with that. I can’t do it right now due to … fill in blank with excuse.”  We may never even get to the excuse-making part because we expect it will be taken care of by another person.

I remember a classic case study from one of my college communication classes that referred to what psychology textbooks now call the “Kitty Genovese Syndrome”, or the “bystander effect.” Kitty was a 28-year old woman who was murdered in an alley outside her New York City apartment building in 1964. After an initial encounter and injury she screamed for help - prompting the attacker to run off. Ten minutes passed and no one came to Kitty’s aid, so he returned to search for her and finish what he originally attempted. Stories have varied over the years, but it seems fairly clear there were several witnesses to parts of what happened, but no one acted, presumably because they thought someone else would help or call the police.

In an opposite and more pleasant example, I have a vivid memory of a time I acted after thinking “If I don’t do it, who will?” My wife Beth and I went to an outdoor concert and toward the end of the performance, someone came on stage and told us the concert would be ending a little early, as they were tracking a severe storm moving toward us. Everyone packed up and began making their way to the parking area, which was nothing more than a field. It started pouring and in a matter of minutes that field turned to mud. We were fortunate to be on a little higher ground and were sitting in line to pull out on the entrance road.

The wait was long and as we sat there I saw a couple about 100 yards away whose car was in a low area and they were totally stuck. The lady was gunning the motor as the man tried to push the car out of the rut. Mud was flying everywhere – mostly on him. I began to glance at them and then back at the distance I was to the exit. Looking at them … looking at freedom. Back and forth. After a few minutes I finally looked at Beth and loudly said, “NO ONE IS GOING TO HELP THEM!” She calmly said, “Nope, sure looks that way.” Then, in my mind, I said to myself (even louder) “WHY AM I NOT GOING TO HELP THEM?!?” And that’s when it hit me: If I don’t do it, who will?

The rain continued to hammer down, so I took a deep breath and ran over to them. We couldn’t get much footing, but between the two of us, we were able to rock that car out of its spot and get them going. The guy and I high-fived and stared at each other all soaked and muddy. We both had huge smiles on our faces and I couldn’t have cared less about the rain. I walked back to my car, stripped down to my underwear, and got in to leave. Beth said I had the cheesiest grin on my face the entire trip home.

My two examples differ greatly – one a life or death scenario and the other a stuck or unstuck scenario - but at some point, we have to act on our impulses and not wait for someone else to step up. I may have responded to my feeling in the muddy field that day, but more often than not, I fall short. It's easy to look past areas of need, while thinking some other nameless, faceless person will offer help. Maybe they will. Maybe they won’t.

Wherever help and generosity are needed, I tell myself that others are better equipped to do it; have more time to do it; more resources to do it, etc.   What is the difference in those that almost always act when they see a need? Maybe they just have more willingness to do it … more heart to do it.

Ouch. That hurt inside when I wrote that last line. Whatever I am or am not, I don’t want to be the guy that doesn’t have enough heart. I know we can’t do everything. We can’t address every need or answer every call, but we can be more intentional about it. If we focus on it more and make it part of who we are, maybe this world becomes a better place, little by little.