"They Call Me Country" 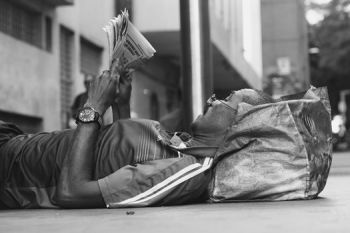 I had a sobering experience recently during a late lunch at a fast-food restaurant. There were only three customers (including me) in the place and I was checking email on my phone as I ate. A voice from across the room said “Looks like this cold weather is going to be here for a while.” I looked up to see a man I assumed was homeless from his appearance.

He was drinking a cup of coffee he had purchased and was kind of hunkered down in one of the booths. He cradled that cup in his hands like it was full of gold, but showed no real interest in drinking it. My guess is it was the cheapest, warmest thing on the menu and the restaurant would let him stay as long as he was a “patron.”

I answered “Yeah, but looks like it might warm up some next week.”   He made a couple of more comments and I would look up briefly from my phone to answer him or comment on something he said. The last time I looked up, I stared at him … hard. I waited for him to ask me for money, but the request never came. He stared back at me and I could tell he just wanted to talk.

I picked up my water and walked over and sat down across the table from him. We looked at each other for a moment and I asked, “What’s your name?” He said “they call me ‘Country’.”   He was 39 years old and looked 55. He said his dad died when he was 19 and he’d been on his own ever since.

He told me he worked on and off over the years, but started drinking too much. That led to trouble with the law and began his journey around the region trying to stay one step in front of a possible arrest. He made sure to tell me his crimes were minor, but so numerous no one would hire him. He might find some day-labor work every now and then, but nothing he could count on.

He had a “place” to live within walking distance of the restaurant. I asked him about staying at the Rescue Mission or other organizations in town that offer help, but he said he preferred being outside. “Besides,” he said, “even when I have a little money to get a motel room, it just doesn’t feel right inside.”

He had just lost his girlfriend to cirrhosis of the liver a few months prior. She died lying next to him as they slept one night. “It’s been real hard since she’s been gone,” he said. “Can’t sleep very good now. Got used to her being there beside me.”

Country said he “had the Lord in his life now” and was trying to make better decisions going forward. I gave him the few dollars I had in my wallet and told him I would pray he make positive strides with a job, his health, and a place to live.

It’s been a month since I met Country and I think about him often. Should I have done more? What will happen to him? He was not interested in any of my suggestions about potential help. I felt - and still feel - totally inadequate in my response. I also feel overwhelmed when I think of how many more are just like Country. Where do I (we) start?

I’m writing about Country because I believe I’m not alone in this feeling. We see so much need in the world it seems it’s a hill too big to climb, so why even start? We can’t possibly make a dent in all the brokenness around us, right?   The feeling of not knowing how to begin a huge task becomes paralyzing and often we end up not beginning at all.

I’ve decided to stop looking at the enormity of problems/issues and start breaking them down into smaller pieces. I’m going to start with one experience at a time and make an effort to improve it. One situation at a time. One person at a time. I’m asking you to do it with me. If we all start with “one” thing, then they’re going to add up quickly. Thousands of “one things” could become meaningful change.

My heart wants to completely solve the homeless problem … tomorrow, but my head tells me that’s not possible. It’s easy to have that “go big or go home” mentality. If we’re not impacting an issue on a grand scale, it can feel like we’re not doing much. Just because we can’t fix something completely and immediately doesn’t mean we can’t start with one thing.

There has to be a point when we decide to engage.