How Yoga, Tim Conway, And "Seinfeld" Moved Me 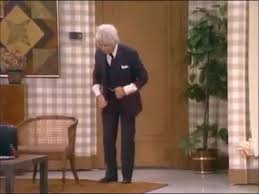 Several years ago, I was at the YMCA working out and met my wife coming out of a yoga class. She was talking with a mutual friend that instructs the class. Our friend invited me to class and I replied I didn’t think I could do any of the poses; I’d be one of the few men there, and would generally be self-conscious and uncomfortable. She said “Fine, if you want to walk like Tim Conway’s old man character from the Carol Burnett show when you’re 70, then don’t come to my class.”

I smiled and laughed a little, but her comment hit home. Conway’s character was one of my favorites as a kid, and I tried to imitate his voice and that ultra-short stride he had as he walked. As funny as I thought it was as a 5-year old, I understood the point my friend was trying to make. I knew the class would be good for me, but it was going to be way out of my comfort zone.

As much as I talk and write about not being afraid to get uncomfortable, I’m surprised I haven’t used this yoga story as an example before. I thought I wanted to try the class, but I needed more information. I began my reconnaissance work by trying to look in the small window on the door of the next class. Peering through the opening, I was sure I’d be escorted out of the building as “the pervert ogling the yoga class.”

Actually I was evaluating the skill level in the class. Any good yoga instructor will tell you that comparing what you’re doing to someone else is counterproductive to the process. Well, I needed to know I wouldn’t be the “worst” one in the class – even though there is no such thing. Clearly I have issues. For me it was like looking out on the dance floor at some event and finding one or two people who have no moves whatsoever - like Elaine Benes dancing in that famous Seinfeld episode. Once I find them, then it’s safe to go in the water.

There were a couple of Elaines in the class, so I decided to check the upcoming schedule and dive in. I showed up the next day and went to the very back of the room and did my best to be inconspicuous.   I struggled, strained, grunted and sweated more than anyone in the room. We had a substitute instructor who was very encouraging and I made it through without injury – to my body or psyche.

I’ve been doing yoga on and off over the past dozen years now, and it has become a modest, but important part of my life - both physically and mentally. All because I decided to get uncomfortable … and of course, the two Elaines helped.

Why do we crave comfort in our lives? Why is it so important to us? Who said it’s supposed to be that way - Society? Parents? Peers?

After a little research, it seems we can blame some of this on our brain, and specifically a part called the limbic system - sometimes called the “emotional” brain. One article I read offered that when we feel uncomfortable our limbic system has triggered a “flight” response in our brains and we feel our best chance of survival is to leave the area or close ourselves off for protection from the situation.

This seems more applicable for one of those Planet Earth episodes on Netflix - as opposed to why I didn’t want to go to yoga - or why you’re hesitant to try something new. Regardless, it makes sense. We don’t like being uncomfortable because it doesn’t feel good. And we really like to feel good … pretty much whenever possible.

None of this means you’re going to get a pass on staying in your comfort zone forever. Being uncomfortable may be a mild form of stress, but I’ll bet you’ve never tackled anything new, learned a new skill, or challenged yourself without a little stress. It often focuses us and makes us dig a little deeper.

You’ve either quit reading when I was rambling on with the yoga story, or you’re considering something you’ve always wanted to do, change, or try in your life. You may feel uncomfortable just thinking about it.

Remember the scene at the end of Dead Poets Society when Ethan Hawke and half his class muster the courage to stand on their desks to say “O Captain! My Captain!” to Robin Williams? You can feel the angst and agony shown on their faces. Limbic system be damned!

Nobody said it would be easy. When we reach, grow, and do more in our lives, it quite often will involve discomfort. Embrace that feeling as much as possible and remember what might be on the other side.