The Black Eyed Peas Are Still Right - "Where is the Love?" 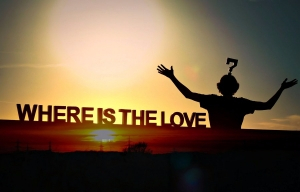 I watched a news story recently about a huge performance being cancelled at a local university because there was a white nationalist rally scheduled to be held there the same day.  I immediately had feelings of anger, frustration and contempt.  Parents and students talked of all the hard work and preparation that went in to staging the event.  You could see how disappointed they were.  On one hand I was upset because I felt like the university was caving to the bigots and their hateful message.  I also understand the main concern for the university was safety, so it’s not unreasonable to make the call they did.  At the end of the news segment, the main feeling I had was sadness.

The following night after that news story, I got a phone call that made me cry.  I’ve been in the Big Brother Big Sister program since 2009, and my “little” brother David was calling.  We were matched when he was nine years old and he’s about to turn eighteen.   David and his family are all black, and I’m a white, blonde-haired, blue-eyed man who grew up in the south.  I mention this as a contrast to the news story.   He was calling to ask me to walk out on the field with him before his last home football game on senior night – David, his mother, grandfather… and me.  I felt so honored that I started to cry a little.  What a difference I felt in the two instances just described.

Trying to reconcile my conflicting feelings, I wondered about the circumstances that lead some human beings to espouse hate, racism, and prejudice.  I know there are many sociological/psychological/cultural rabbit holes we can dive down to find reasons, but sometimes the basic lack of love and humanity is spirit crushing.  Is all this hate learned?  Is it built up through life experience?  Am I just lucky to have grown up in a loving, tolerant home?  Both sets of my grandparents were prejudiced and somehow my parents broke that cycle.  They’ve talked about it over the years, and for reasons they weren’t completely clear about, just knew many of the things their parents thought/said about race and ethnicity were wrong.

I think about it now and believe there has to be a willingness to learn more about others who aren’t like us.  That’s easier said than done.  We tend to partition ourselves off from others in all types of ways:  by race, culture, religion, gender, nationality, political views, etc.  There is usually some level of discomfort when we stray outside our normal “borders” and that keeps many people from doing it.  I felt pushed and decided it was important for me to get uncomfortable and join Big Brothers Big Sisters. I never asked or requested anything specific about my “match”, but knew he would probably have a much different background from mine.

One of my favorite stories about my time with David was two or three years into our relationship.  He and his mother were having family in town from Chicago for Thanksgiving and they invited me to come.  Some of them knew we were in Big Brothers and some did not.  We had a great afternoon and I called David a couple of days later to see how he was doing.  I asked what his family who didn’t know about Big Brothers may have said concerning my presence.  He confirmed what I thought might have happened – there was more than one comment that went something like, “Hey David…what’s up with the white boy that came to dinner?”  I love that!  After spending the afternoon with his family, I knew nothing about that statement was ill-intentioned.  I would never have known that for sure unless I had spent time with them.

Thinking about that afternoon in light of the hate and division that seems to be rearing its head more, I noticed something.  There was effort from everyone to engage and empathize.  It wasn’t overt and I really only recognize it looking back.  We were all genuinely interested in learning more about each other.   I know there are people with lots of initials after their names that study race and ethnic relations who are smarter than me.  I’m simply giving you one example of how I believe we begin to love and respect those we disagree or have little in common with (cue the song Where is the Love?  If you don’t know the song – check out the video or read the lyrics.)

I refuse to believe the best option in battling hatred and division in the world is to hunker down, look the other way, and continue to only surround ourselves with people that look, act, and think like we do.  I’m not suggesting we change our basic beliefs or moral tenets, but I am suggesting we look for ways to engage and empathize with those who view the world through an entirely different perspective.  It has to start somewhere if we are to mend the brokenness that seems so prevalent today.

It has to start somewhere.