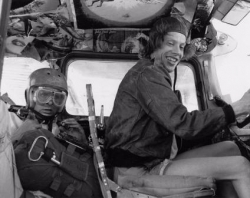 “C’mon Dad, it will be fun!”  My oldest daughter Bailey kept saying that to me, but I couldn’t get past the feeling I was going to throw up.  Two summers ago I was about to turn fifty, and wanted to do something I had never done before.  Bailey thought that skydiving would be the perfect activity for me – she had done it the summer before and loved it – plus she wanted to go again.  I can assure you of all the things I was thinking about doing, jumping out of an airplane never came close to making the list.  As I age, I seem to have developed a growing fear of heights.  The mere thought of doing it made me break out in a sweat.  I was genuinely afraid.

I got up close and personal with fear back in 2006, when my wife and I were both diagnosed with cancer just six months apart.  There’s a whole new intensity to fear when you stare death in the face.  I’ve learned a lot about fear and how it affects us.  In fact, as I look back at my life, I realize fear is something I’ve dealt with quite a bit.  I’ve almost embraced it to a certain degree.  I don’t mean I like it, but it drives me in many situations.  The motivation to “not fail” pushes me as much as the prospect of success does.  I don’t know if that’s healthy or not, but to this day I am still motivated that way to a certain extent.  I fear not being the best husband and father I can be, so I am driven to live up to some unreachable standard I set.  In my previous job, I worried about all the potential issues that could keep things from running smoothly, and I knew if I addressed them, we would do well.  I fear my cancer could come back, so I pray, work out, do yoga, and drink these smoothies in the morning that look like something I’ve seen in a six-month-old’s diaper.  Hold up before you picture me alone in a dark room watching Matlock reruns.  I consider myself an optimistic, happy person, but fear is definitely something I deal with on a semi-regular basis.

So, back to the part where I’m trying not to puke.  After several requests from my daughter, I finally said yes…and she looked almost shocked.  I told her I needed to do something I was really afraid of doing.  I told a friend/co-worker what we were doing, and she wanted to go.  We had a 3 hour drive to the jump site, and everyone was getting anxious as we got closer.  We drove through some beautiful countryside once we got off the interstate, but then passed a small cemetery and everyone made some nervous jokes about it.  Then, we passed another cemetery…and another one. THREE cemeteries on this rural two-lane road in the last 10 miles of our trip!  I asked if so many people died jumping out of airplanes in this area they couldn't keep up with the demand to bury all the bodies!

We arrived and they were over an hour behind schedule, so we had to wait…at least it gave us time to watch the video version of the waiver we signed mentioning death no less than twenty times.  As we finally piled into the little plane, I buckled on to my tandem partner Ronnie who would make sure we did everything right.  The short ride to altitude was brutal for me.  As Bailey stepped to the door, she looked back at me and said “You good Dad?” with a thumbs up.  I said yes as they rolled out.  I immediately looked behind me and yelled “RONNIE I AM NOT $*#^%#& GOOD!"  He said, “It’s going to be great…besides, it’s too late now anyway”, and we tumbled out into what almost looked like a fake picture below me.

The next five minutes were some of the most amazing, exhilarating, and gut wrenching of my life.  It was so beautiful and peaceful – except for the parts where I was screaming.  I prayed to God for the parachute to open, but mostly I told Him how thankful I was for my life and being with me through good and bad.

Author Jon Acuff wrote a book called Start and the subtitle is “Punch Fear in the Face”.  Remember that the next time you tell yourself you can’t do something because you’re afraid or it makes you uncomfortable.  I write and speak a lot about getting out from underneath our blanket of “comfortable” and doing those things we’ve always just talked or thought about.  Sometimes it takes more than just throwing off that blanket – you’ve got to punch it in the face.     #reachgrowdo